How Important are Role Models? 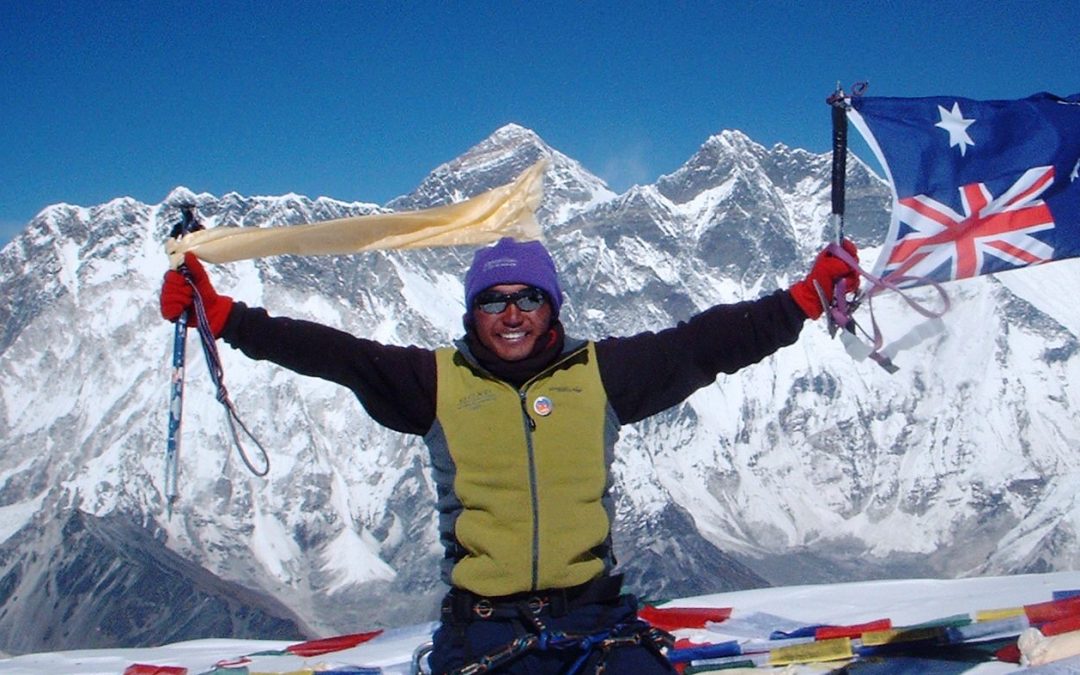 “If I have seen further, it is by standing upon the shoulders of giants”
– Sir Isaac Newton

In times of change and uncertainty, role models can give us perspective and hope

The last two years have taken their toll on people all over the globe. In Australia, we’ve faced devastating bushfires, riots, political sparring and instability along with the social and economic cost of the pandemic. In difficult times, we seek certainty and stability. We need people who show perspective and calm despite the chaos. Role models can play an important part in how quickly we adapt to change and the human dilemma.

Nelson Mandela or ‘Madiba’ is a role model to many and for good reason. He responded to turmoil and oppression with generosity of spirit and dignity. After spending 27 years in prison for fighting against institutionalised racism, he was able to show empathy, even towards his adversaries.

As Bill Clinton so aptly said, “When you were around him, you wanted to be a bigger person. You knew you could be better than you were.” That statement perfectly sums up the ideal role model. Someone who inspires you to do better, to be better.

“Any time I’ve dreamed of success in any area of my life, I’ve sought coaches, mentors and role models to show me the way. They have been fundamental to all of my achievements.”

As a teenager I immersed myself in team sports. In retrospect, I realise that my coaches taught me far more than the technical skills of each game.

Take Richard for example, one of my first basketball coaches when I was 14. Richard wasn’t much older but he had an incredible work ethic. He gave up his time to coach us and always arrived at practice on time and full of energy, ready to drill us with new skills. I realise now that I absorbed his focussed energy, fairness and composure, at least as much as a 14-year-old boy can. Richard might’ve thought he was just coaching kids’ basketball, but he was demonstrating how we could be diligent and strive for greatness both on and off the court.

Another role model of mine at the time was slightly better known in the basketball world, Michael Jordan. I had a poster of him on the back of my bedroom door with the words, “Limits, like fears, are often just an illusion.” I’ve reflected on those words repeatedly throughout my life and they inspired my latest virtual keynote experience, “Life Beyond Limits”. 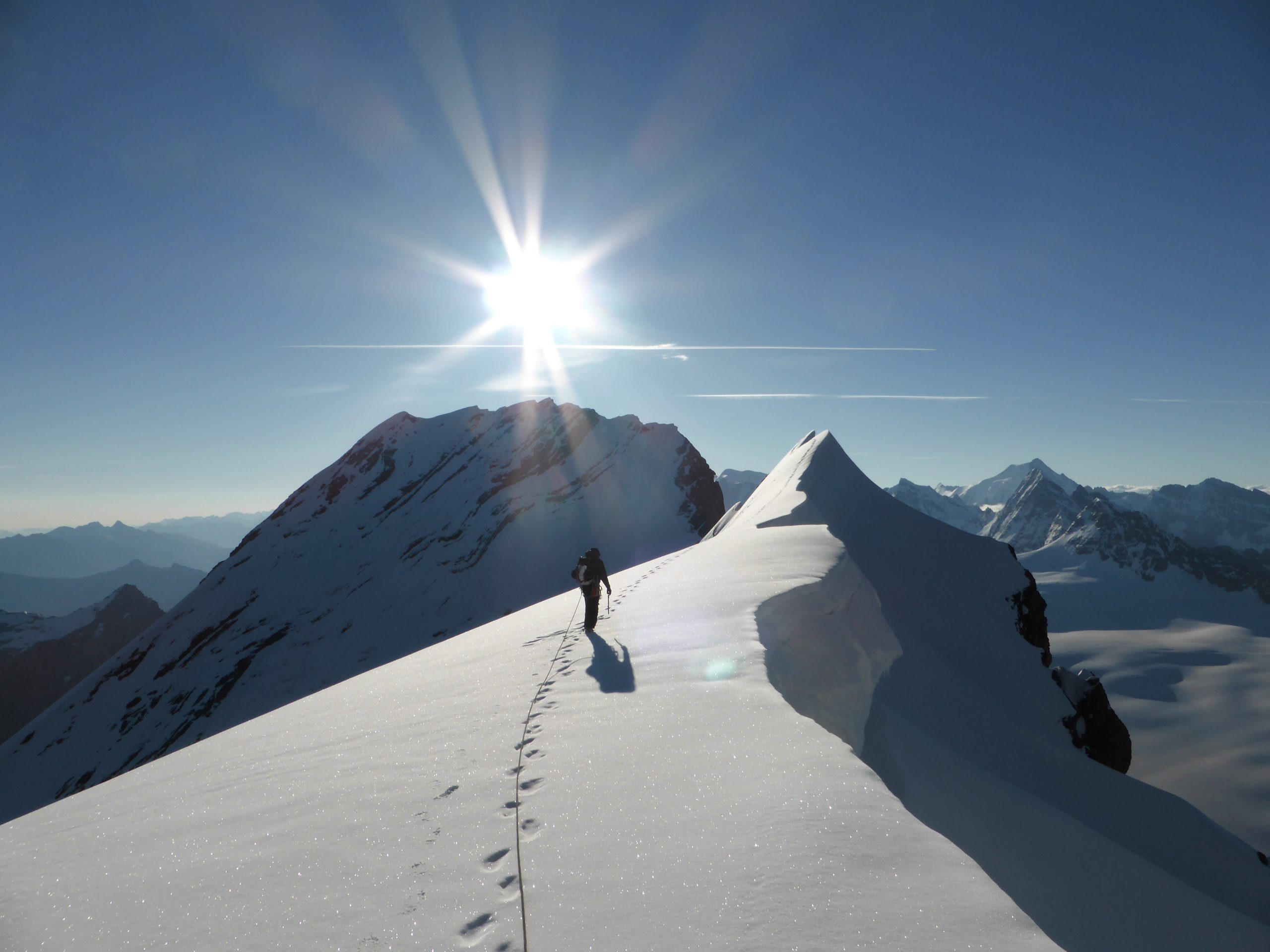 “With every expedition, I’ve accumulated not just experience and world records but inspirational allies.”

It was during my earlier years that I became fascinated with heights. At 23 I finally headed for the Himalayas for the first time and my journey to the top of the physical world began. Right from the start, I realised how crucial it is to seek out mentors and guides before any climb begins.

As an extreme adventurer, your success and often your survival depends on being properly equipped and prepared. You need to reach out to people you can trust. People with the expertise and knowledge you need. People who have successfully accomplished what you’re striving towards.

As Tony Robbins says, “Success leaves clues. Nothing on earth is more valuable to an individual’s success than the life experience of someone who is a true master. Someone who is already producing the results you seek.”

For my introduction to the epic Himalayas, my master turned out to be a guy half my height who spoke very little English, a young Sherpa named Jyamchang. He supported me through one hell of an apprenticeship, offering encouragement when I felt overwhelmed and demonstrating remarkable courage and compassion. Though he was softly spoken and small in stature he was full of knowledge and had the strength of Hercules. 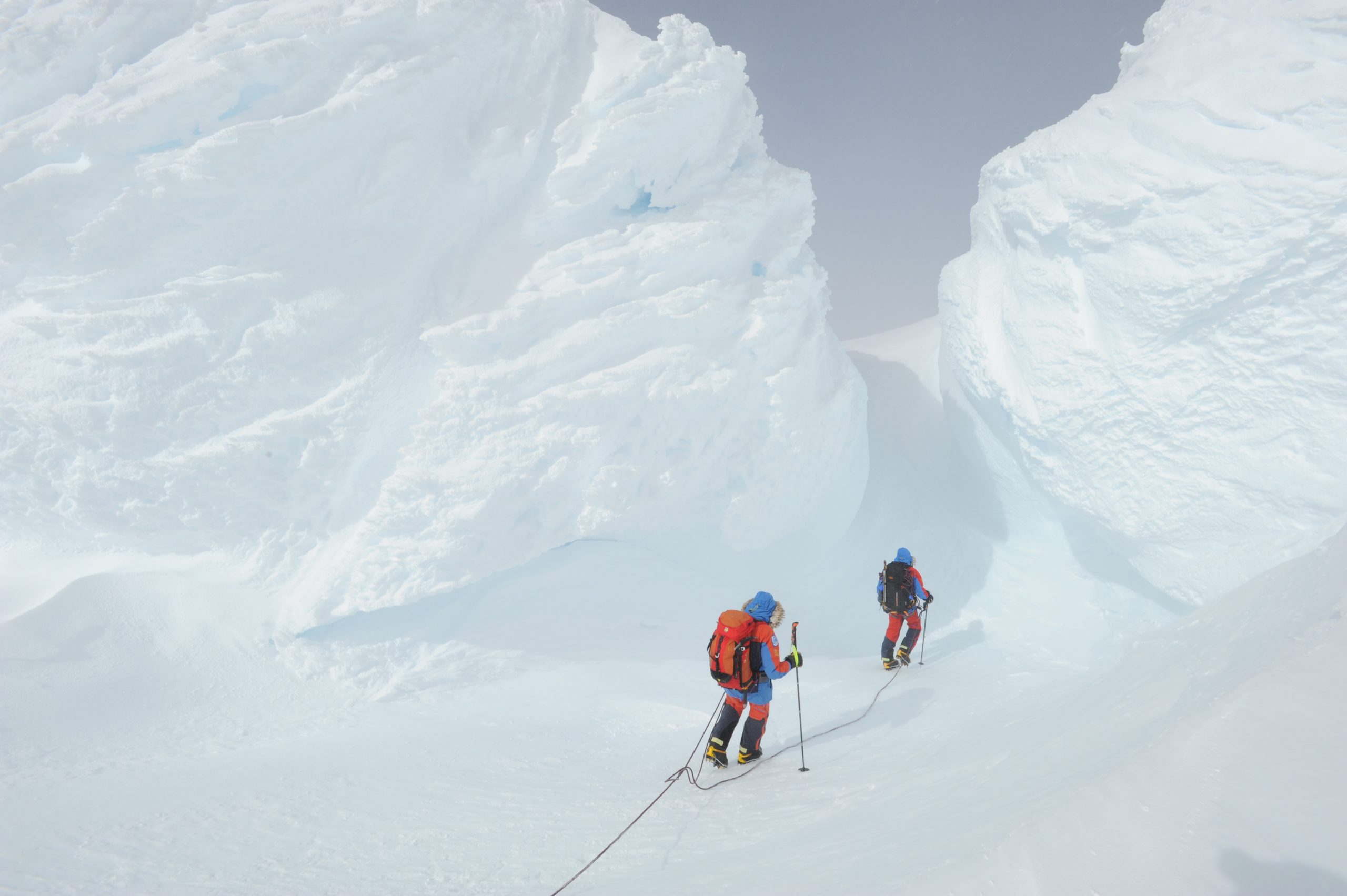 “The right role models don’t just magically appear. You have to actively seek out a team of masters, supporters and believers.”

Finding the right person to support you isn’t always easy. I remember when I set my sights on climbing the North Face of the Eiger. I could see the peak from my office window in Switzerland, beckoning me. Considered one of the most dangerous climbs in the world, it’s a vertical mile of brittle rock and sheer ice that has earned the nickname, “Murder Wall”. I’m sure most would take one look and think, not a snowballs chance in hell am I climbing that, but I was transfixed.

Despite having already climbed Everest, I knew I’d have to completely reinvent myself as a climber and learn from the masters. I approached elite climbers across Switzerland, Austria and France along with renowned mountaineering and guiding organisations. They all turned me down. Some called me crazy for even considering the climb. I remained resolute and after months of refusals, I found someone willing to teach me the skills I would need to get it done.

The training was brutal but I gained the technical skills, fitness and grit I needed to succeed. Years later, I still feel a sense of terror when I recall a night spent bivouacking on an ice ledge narrower than my shoulder width half way up the biggest North Face in the Alps, perched precariously over the thousand metre drop. But I did it. I climbed the “Murder Wall” and I survived to tell the tale. It took one person to say yes to guiding and mentoring me. It also took the ongoing support of Team UNSTOPPABULL and all the role models in my life who propel me forwards. Or in this case, upwards.

“I’m fortunate to have an abundance of positive role models in my family. They have shown me how to get over my most painful challenges and fully embrace life.”

When you spend long periods of time in harsh, frozen landscapes, your mind inevitably turns to family. Mine is full of role models including my mum and dad, my two sisters, and my uncles and aunts. Many of them have overcome multiple obstacles with grit and grace. None more so than my Nan.

Nan was stoic but showed endless kindness and selflessness. These attributes never wavered despite living through multiple global pandemics, world wars and personal crises. Even when she beat me at a game of cards, she reacted with gentle modesty. There was never ego. There was always love. 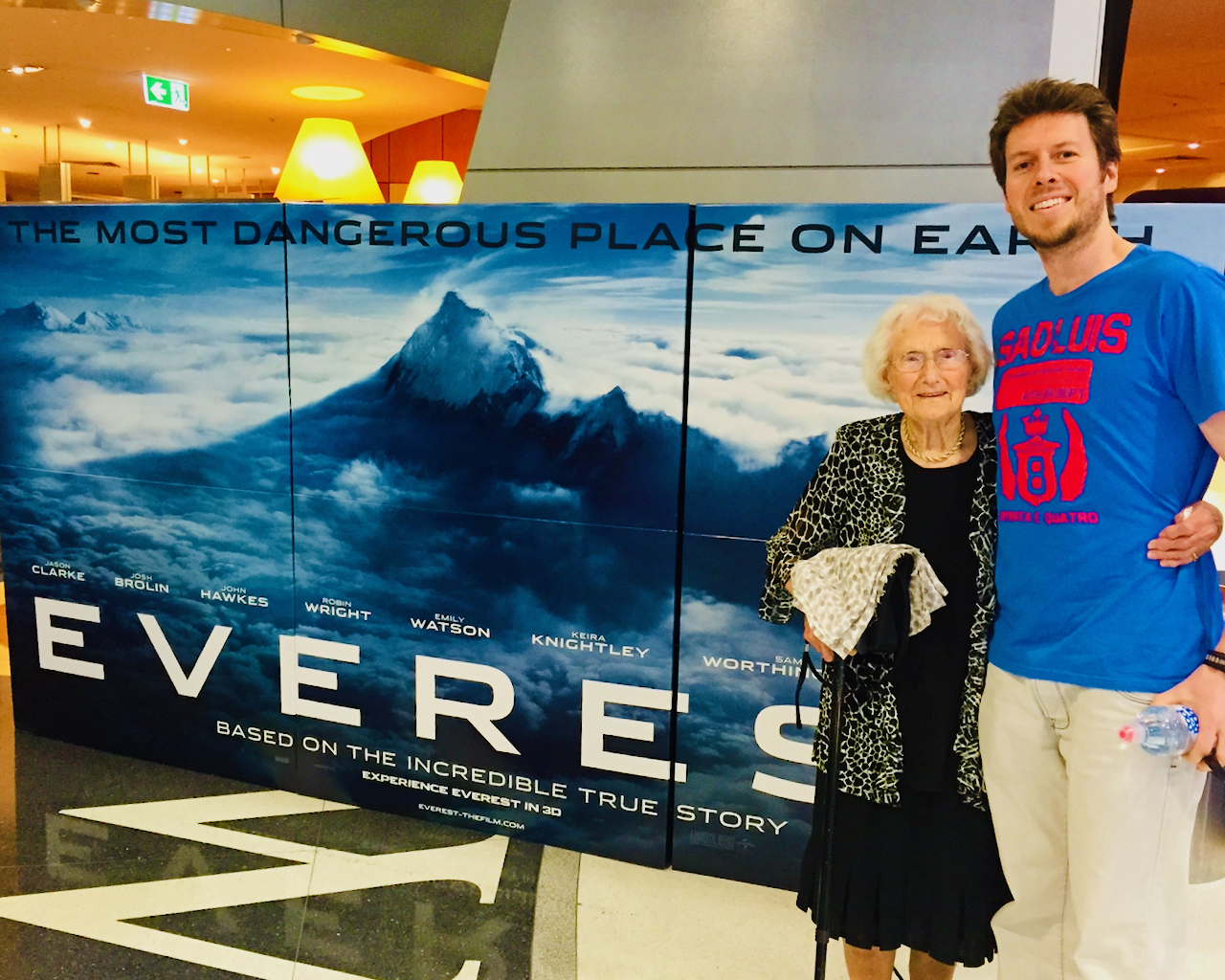 “When I think of the role models I admire most, they tend to demonstrate similar characteristics – determination, compassion and humility.”

Jim Stynes was a gifted Australian Rules footballer whose career spanned 264 games, a Brownlow Medal and four best and fairest awards, playing for the Melbourne Football Club – premiers of the 2021 AFL Grand Final and one of the world’s oldest professional clubs of any football code. Yet, when I think of him it’s not the AFL Hall of Fame that immediately comes to mind but rather the way he gave back to the community. Before tragically passing away at 45, he worked tirelessly to promote mental health and wellbeing and instil self-belief in young people.

When my mum was undergoing cancer treatment, my dad asked Jim to visit her in hospital to share some of his courageous spirit. Jim agreed even though he had never met either of my parents. He will always be remembered, not just for his outstanding career, but his courage and selflessness.

“A role model provides more than inspiration. Their very existence proves that big, bold dreams are within reach for all of us.”

Role models have been vital in me achieving big goals despite the odds. Connecting with uplifting and inspirational people is crucial for a happy, well-balanced life. No matter what your goals in life, role models play a vital role in helping you achieve them. They also help make sense of this ever-changing world, grounding us at a time when we need it most.

I compel you to go out there and find the people who believe in your dreams, encourage your ideas, support your ambitions, and bring out the best in you. When you find them, you’ll be able to conquer your own version of Everest or the “Murder Wall” with better perspective and a true sense of purpose.

What adventure can we take you on next?

Daniel Bull is a 3 x world record-breaking extreme adventurer and virtual keynote speaker. He specialises in empowering leaders and teams to become more resilient, fulfilled and successful, whatever challenges they face.

Focusing on resilience and grit, peak performance, and the power of mindset, Daniel inspires audiences with his passion and authentic presence. His spectacular footage combined with the latest digital technology creates an exhilarating and highly interactive experience.

As a keynote speaker who’s headlined both live and virtual conferences, Daniel inspires audiences to find their own Everest and tackle it with confidence.